I’m very happy to announce the release of Emiko Sato’s debut album, Romantic Moment.
Emiko Sato is a Japanese pianist and sought-after solo and chamber musician in both the U.S. and Japan. Last year, she invited me to create the CD cover and art direction for her first album. Our collaboration has resulted in a wonderful melange between visual art and music.

Below you can read more about the concept for the album art and the design process of the CD jacket.

“Emiko’s debut album, Romantic Moment, features works by composer-pianists of the 19th-20th century who crystallized their irreconcilable feelings of joy, anger, regret, and despair through music. Emiko retraces their longing and hope through the alluring sound of a Steinway piano.”

The artwork for the album was inspired by the soundscape of the piano music. The composers of this music, such as Chopin, Schumann and Rachmaninoff, belong to the romantic period. Through their works, they convey feelings of hope and nostalgia and a strong connection to nature. The album art reflects the range of emotions presented in their compositions.

The outside of the album jacket is held in coral tones. Like a spring landscape in sunrise, it reflects feelings hope. The inside of the album jacket is held in lavender and indigo tones. Like a landscape that is slowly changing in the seasons of fall and winter, it reflects feelings nostalgia and a sense of impermanence. Emiko also describes this cyclic change with the Japanese concept of En (縁), which means connection, bond or destiny.

In order to realize the concept of En, I’ve created an abstract landscape painting that consists of 6 connecting panels. Each panel corresponds to a side of the CD jacket. The panels connect with each other like a loop, aligning with the way the CD package is opened and closed. This way, the album art reinforces the concept of En; the cycle of the seasons, the constant flow of time and music.

Emiko on location of the photo shoot

Her photo is blended into the painting

Detail of the finished painting

Emiko’s love for Sakura was another central concept for the album art. The soft pink blossoms perfectly reflect Emiko’s cheerful character and the flow of her piano music. We were lucky enough to shoot the photos for her album during Sakura season earlier this year. A few days before the photo shoot, the trees had just started to sprout. The morning we arrived on location, they were nearly in full bloom.

Back in the studio, I embedded a photo of Emiko directly into the painting. The photo was blended into the abstract landscape through layers of thin glazes of oil. With the placement of Emiko’s photo, the concept of En had come to completion. The result is an album cover that reflects the emotional range of the soundscape of the album, as well as Emiko’s artistic personality.

“To a romantic, a cloudy sky is more than a natural phenomenon; it is an expression of gloom. Similarly, trees sprouting in the spring convey the excitement of falling in love.”

Emiko Sato is a New York trained pianist, currently based in Kyoto, Japan. She obtained her Doctorate of Musical Arts at the Graduate Center, City University of New York and is a sought-after solo and chamber musician both in the U.S. and in Japan.

You can find out more about Emiko on her website and social media: 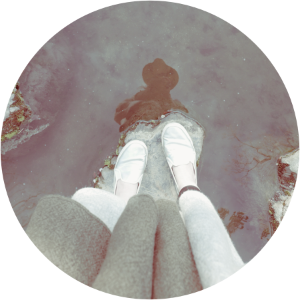 A collection of artist news, art tips, travelogues and notes. Inspired by Forests, Mountains and Impermanence.
Written, photographed and illustrated by Sonja Kanno in Japan.